The design was generally based on American firearms inventor John Browning‘s Browning Hi-Power, as adapted by Piotr Wilniewczyc and Jan Skrzypiński in 1930 at the Fabryka Broni (Arms Factory) in Radom under Director Kazimierz Ołdakowski. It operated on the short-recoil principle, with the barrel being cammed down and away from the locking lugs in the slide.

This later John Moses Browning design, unlike the M1911, was not cammed by a link, but by a ledge of sorts, which contacts a portion of the barrel and forces it down as it is moved rearward with the slide by the recoil force. Some similarities to the Spanish Ruby 0.45 ACP.[2] Like the 9mm Browning GP, a characteristic feature was a triangular grip shape, wider at the bottom, offering good ergonomics and firm grip.[1] On the right side grip cover, the Polish copy pistol had letters VIS in a triangle, on the left side—FB (for Fabryka Broni—“Arms Factory“). The handgun was prepared in late 1930, and at the beginning of 1931 the first pistols were ready for testing. Initially it was named WiS (an acronym of the Polish designers’ names), later the name was changed to Vis, meaning „force“ in Latin, with the wz. abbreviation for wzór („model“).[3]

The tests proved that the handgun was very accurate and stable (due to its size and mass, most stresses are absorbed and not passed on the shooter), while at the same time remaining reliable after firing more than 6,000 rounds.[1] The Vis was generally regarded as one of the best military pistols of that period.

Production started in the state armory Fabryka Broni in Radom in late 1935, and the following year it was introduced as the standard weapon of Polish infantry and cavalry officers. Successively, other units were to be equipped, and by 1932 all other handguns were scheduled to be withdrawn from service. By mid-1938, it was introduced to the armored and air forces. Before the Invasion of Poland, approximately 49,400 (out of 90,000 ordered) were delivered to the army.[4]

In addition to the 9mm, there was also a small information series of .45 ACP version, with 7-round magazine, but they were not produced in greater series.[4] Most probably only for the Argentinian competition the wooden stock-shoulder was issued but it has not survived.[2] A .22 LR variant also existed, but no details are known, and its series was not produced in great numbers.[4]

Fearing that Polish technicians working in the armory might supply the Home Army with the weapons, the Germans moved production of barrels and final assemble to Steyr-Daimler-Puch in the „Ostmark“ (Austria). However, underground production of Vis barrels was started in Warsaw and Kielce-based Huta Ludwików, and several hundred Vis pistols were assembled of parts smuggled from the factory, delivered to the Home Army and used extensively during the Warsaw Uprising, among others.

Vis pistols made after 1939 were issued in four different series, each with small modifications to simplify production. In late 1944, all production was moved to the Steyr works in Austria, where the last simplified model of the fourth series was produced (with no inscriptions at all, apart from bnz signature). The Vis remained in production until April 1945. Generally, the wartime Vis were of much lower quality than the original, and further degrading towards the end of the war.

After the war, production of the pistol was not continued, as the Army of the People’s Republic of Poland used the Soviet TT-33 pistol, produced in the former Fabryka Broni in Radom due to Warsaw Pact regulations. It was considered much inferior to the Vis, especially in ergonomics and reliability,[1]but political considerations and Soviet influence were decisive.

In August 1997, the Łucznik Arms Factory in Radom reintroduced the Vis pistol and produced a small series of some 27 pistols[1] on the basis of the original plans and specifications, mainly for the US collectors’ market. But it differed from the original pre-war pistols with the shape of the rear sight notch and the Eagle on the slide.[2] In 2012 IWA Radom Factory has presented the piece dated 2010 that was chromium coated instead of proper bluing. 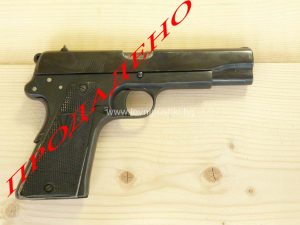 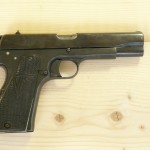 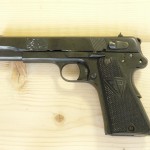